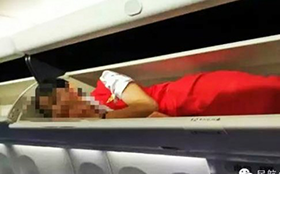 From the nothing-shocks-us anymore department:

It seems security staff for a Chinese airline, 17 fleet Kunming Airlines, has an abusive ritual for new flight attendants who have served 30-50 hours on the job. They make newbies crawl into the overhead luggage bins. They did this on empty planes without passengers present.

A microaggression? Consider, as a rational person, what the abusers are saying about the worth of their coworkers –you are nothing but a piece of baggage.

Management at the airline said that no one has ever complained. Of course not. Think of the humiliation. How exactly does one describe what he or she did on the command of another?

Here’s one instance where social media helped get the word out. The pictures broke the silence that shrouds this kind of behavior. Then, and only then, management felt compelled to state that it will prevent its recurrence. And the company wants to remind customers that no flights were disrupted by this inane and cruel behavior.

This entry was posted on Tuesday, October 13th, 2015 at 8:33 am and is filed under Tutorials. You can follow any responses to this entry through the RSS 2.0 feed. You can leave a response, or trackback from your own site.