Here in America, employers claim that loyal, engaged, hard-working employees have disappeared or are extremely rare. Work, like many social functions operates on the notion of an implicit contract between the parties. In exchange for compensation, workers lend their talent to employers. Employers, in turn, have the exclusive right to optimize profit from the relationship. The deal should be a mutually beneficial one to both sides.

History shows that contempt for workers was common in the bad old days.

There never was an equality of power between workers and owners. In the worst of feudal times, kings exploited the lower classes by forcing them to work the land without ownership rights. Then, there was outright enslavement of Africans to establish and maintain the economic development of the nation. Again, ownership was retained by the slave “owners.” Reconstruction after the Civil War extended slavery by another name, which was ostensibly outlawed by the 14th Amendment to the Constitution, with the invention of sharecropping. Again, owners denying shared ownership to a lower class. The practice of sharecropping extended to poor Americans, crossing racial boundaries. It seems like piling on to add that Jim Crow laws at the turn of the 20th century sustained slavery. Americans in power simply did not want to let go, to share ownership or acknowledge that humans have an inherent right to control their own lives without external masters.

Our good friend law professor David Yamada reminds me that American employment law, derived primarily from British law, characterizes the relationship between employer and employee as one between master and servants. The codification of unilateral control.

Simultaneous with Reconstruction was the emerging Industrial Revolution in America. For unregulated industrialists, it was the first Gilded Age. Carnegie, Frack, Vanderbilt, JP Morgan, Gould and Rockefeller and others with unbridled wealth (Robber Barons to workers, Captains of Industry to those willing to grant capitalism an unlimited license to craft history in their favor). When workers dared to rebel, police and the Pinkertons set upon them, killing and maiming many.

From America’s founding until 1842 in Massachusetts, it was a crime for workers to seek better work conditions and challenge their owners. Unions beyond skilled trades guilds began to form after the Civil War. Calling for workers to unite in unions to balance power with the owners could get one killed, literally. There were 23,000 strikes between 1880 and 1900, few gains for workers were won, but many deaths ensued. Federal troops were turned on striking rail workers in several cities in 1877 by then Pres. Hayes. Rallying to work an 8-hour day in 1886 led to the Haymarket massacre in Chicago. I grew up near Pittsburgh and its steel mills. Famously in 1892, Carnegie had the Pinkertons break up a strike at the Homestead steel plant, killing 10. The strikers were successful until the company used the National Guard to crush them. In 1894, a strike by the union led by Eugene Debs against the Pullman rail company was crushed by federal troops who killed 34 workers (ordered Pres. Cleveland) and ended officially by court injunction. This clearly put the government on the side against workers. In 1914, striking coal miners and their wives and children were slaughtered by the National Guard and the employer in Ludlow Colorado.

The government would become more union friendly only with the passage of the National Labor Relations (the Wagner) Act in 1935 pushed by Pres. Roosevelt. Employers had to allow union organizers to approach workers who then could vote on whether or not to unionized in an election. During WWII, several unions were prohibited from striking. In the immediate post-war years, 4.3 million workers in many industries struck as post-war wages fell. In response, Congress passed (over Pres. Truman’s veto) the Taft-Hartley Act of 1947 to curb unions’ rights. Closed, union-only, shops were banned unless employers agreed. In 1954, at the peak of unionization, 34.7% of private sector workers were members of a union. That percentage is now 6.6%. Public sector unions, at first denigrated by Pres. Roosevelt, then supported by Pres. Kennedy, have a higher representation rate (35.7%)

The reasons for decline in union membership is a topic for another time. However, it is safe to say that the decline, coupled with the historical record of American business owners relying on government to enforce its will against workers who dare to demand better working conditions, suggests that the “greatest democracy on Earth” has trouble getting its principles to pierce the corporate veil. It is safe to say the American workplace reflects the worst attributes of our country — inequality and denial of rights.

I said all this to bring to your attention the latest throwback to feudal relations between business owners and workers. The exploitation sounds new, but don’t let bright shiny technology distract you.

Now comes the story of an opportunistic company, Flexispy, cashing in on employers’ fear that employees spend all their time stealing from the company. How much contempt must employers have to subscribe to a spy service? The operating assumption must be that employees can’t be trusted.

Their appeal is to parents and employers who want to KNOW EVERYTHING happening on cell phones. First, note that employers monitoring workers is equated with parents monitoring children. Workers are self-indulgent, immature, not-yet-developed creatures incapable of self-control, as if they were children.

Here’s a graphic from their sales pitch. 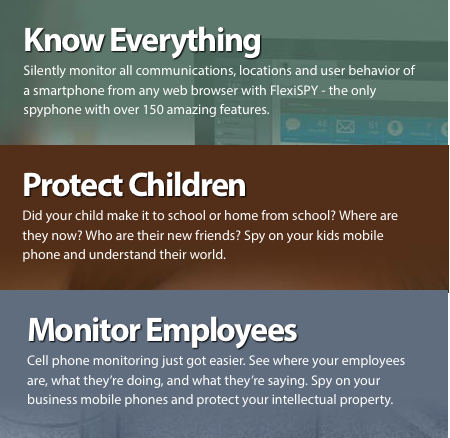 Starting at just $99 month, the employer, without the phone user’s knowledge, can

It’s about ownership — of the cell phone — and the human — by employers.

And the invasion can happen after hours legally simply because the phone belongs to the employer! There are no boundaries that respect the privacy of individuals in America. Property rights trump privacy.

Does this bother anyone?

Because we have been in the middle of worker exploitation by increasingly innovative, conniving employers for 18 years, we fully expect to hear from a bullied target who has been spied on in their home during non-work hours in order to humiliate the person into submission. Bullied targets of today share the experiences of workers long ago who dared to demand safe work conditions.

In bullying, it’s less about risk from collapsing beams in a coal mine than prolonged exposure to stress triggered by a belligerent and cruel boss. Bullying creates an unsafe work environment. Targets deserve safety, physical and psychological. When they finally tell their employer about the bullying, the ghost and spirit of Andrew Carnegie comes alive in management ranks. The demanding worker needs to be put down. The National Guard is not called in, because it is so easy to banish a non-unionized, isolated, tormented and mentally stressed individual worker.

How soon before Flexispy helps fabricate a “case” against a bullied target? And Flexispy subscribing companies will be the ones whining the loudest that loyal, engaged, respectful employees are a rare commodity these days.

Here’s an idea — if you learn your employer subscribes to Flexispy, be sure to record your bully’s taunts and outrageous performances in group meetings. That way, you know someone at the company sees what you have described. Maybe with a hundred or so recorded incidents, they will take the proper steps.

Until then, know that only you, the target, risks termination (for “misuse” of company property)!!!!

This entry was posted on Monday, November 9th, 2015 at 10:45 am and is filed under Tutorials. You can follow any responses to this entry through the RSS 2.0 feed. You can leave a response, or trackback from your own site.