Impact of Workplace Bullying
on Coworkers


Despite the rare success story in coworkers joined the bullied target to confront the bully and jointly testified to the employer about what was done to their injured colleague, most coworkers are notorious for not helping bullied targets. It is hurtful to expect that level of support. From a 2008 WBI study, we know that that rare collaboration happens in less than 1% of cases.

Here we want to discuss how witnesses to bullying in their workplace can be adversely affected. From the WBI 2014 U.S. Workplace Bullying Survey, we know that 21% of adult Americans have been indirect, or vicarious, victims of bullying. Just as families are affected without being the direct targets of bullying, so are coworkers.

Research by others has shown that altruistic individuals are ostracized by groups because the high moral standard they set by exemplary do-good-for-others conduct is considered threatening because it is unattainable by most group members. WBI studies have repeatedly shown that bullied targets possess more technical skill and likability than their perpetrators. They are kinder and more empathic, too. Given this profile of a prosocial and positive target, bullies often command coworkers to isolate the target. Coworkers are often prohibited from helping on work-related tasks, fraternizing socially, or even taking breaks at the same time. Thus, the kindest most productive worker is ostracized by the group.

Another study found that coworkers condemn their bullied colleagues who do not actively fight their bullying. Remarkably, those coworkers have the hubris to claim that they would never let bullying happen to them — clearly a double standard. It is so easy to imagine our future brave action until bullying circumstances overwhelm and surprise us personally. It is humbling to see that we did not act as predicted. Many of us cower instead, jaw dropped, deer-in-the-headlights paralysis onset. Then, we have the audacity to blame the target for something she or he neither invited nor desired.

Social inclusion, belonging to a group, is a fundamental human need. When coworkers are driven to ostracize one or more of their own, they are cutting out part of their own soul. In the long run, despite rationalizations to defend the anti-social acts, the team is less cohesive, more a collection of individuals.

One might agree that we would like to think we all would jump up to help our bullied friends when they emerge from a closed-door meeting obviously slump shouldered and defeated after 30 min. of denigration and humiliation. We don’t. The research shows it. The extensive literature on the bystander effect demonstrates that all generations of witnesses to emergencies and crises do little to help.

Thus, for coworkers as well as targets themselves, the workplace becomes a fear-plagued environment. Employers should hate this because it freezes everyone. When too afraid to act, workers are also rendered less capable of being productive.

Coworkers with a strong sense of duty or responsibility to help others in need may feel personal guilt of having not taken immediate helpful action. Coworker guilt revolves around their behavior or lack thereof; shame, a sense of personal worthlessness, is the primary emotion felt by targets. Guilt can gnaw at coworkers and erode their confidence over time.

The vicarious experience of bullying, as lived by witnessing coworkers, has been shown to trigger the same emotional injuries as experienced by individuals directly bullied. Witnesses suffer anxiety, depression and, in worst cases, PTSD-like symptoms of trauma. Depressed coworkers have sleep problems (disorders involving difficulty falling asleep and sleep of shorter duration with reduced REM time) just like targets who manifest sleep disorders, according to recent research. Depressed workers have trouble concentrating. Bullies falsely claim that their targets are stupid. Over time, with prolonged exposure to stress, anyone’s ability to memorize new things or to retrieve facts, can be impaired. Thus, the stress response that accompanies depression tends to make the bullies lie appear true to the naive observer or investigator.

Trauma symptoms include intrusive negative fearful thoughts at inopportune times that interfere with normal cognition. Flashbacks and replaying of horrific incidents invade routine days and nights. A sense of apprehension over future negative events — hypervigiilance — leads traumatized individuals to lash out at others with anger or suspended living waiting for the “other shoe to drop.” Finally, trauma leads to avoidance behavior. People can no longer approach locations, tasks and people who remind them of their traumatizing incidents. Bullies are the human source of work trauma. It is trauma by intentional human design, unlike PTSD from surviving natural disasters and accidents. The severity of trauma from personalized assaults is stronger than for trauma from impersonal events.

As stated above, group members who betrayed the target within their team, inflicted wounds on themselves by depriving themselves of satisfying the strong inclusionary need.

In other ways, the witnessing of the abuse of the target speaks volumes about employer credibility. There is always lofty language in the company statements about its mission, vision and values. Phrases such as “Respect for all individuals,” “Dignity for all,” “We care about everyone” are proudly printed, framed and hung in prominent places throughout the building. Unfortunately for most employers, those phrases ring hollow.

The employer’s response to bullying is a litmus test of its ethicality. If the bullied target is persecuted but no action is ever taken to stop the bully and the target is most likely disappeared, then witnessing coworkers see that their employer is not honest. Dishonest unethical employers do not bother to provide safe workplaces. Coworkers start to fear for their own safety if such horrific treatment of the target was possible. Time to look for a job elsewhere.

Pity the employer that allows bullies to drive out countless targets that then launches “Employee Engagement” programs to compel employee loyalty. Good luck. HR faces a resistant and cynical employee pool. Nothing will be accepted again by the disingenuous employer. 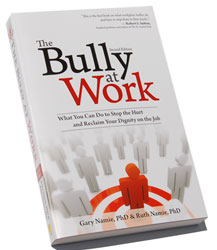 The book for Targets